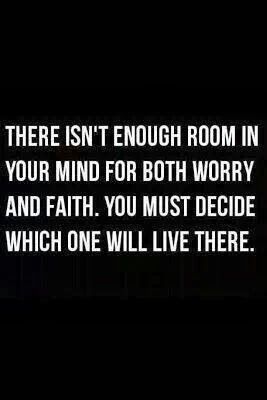 My grandmother was a worrier.  She was the daughter of a preacher, a strong Christian herself, but if she didn’t have anything to worry about, she would come up with something.  Her son was in the Air Force (retired by the time I was born), yet every plane crash she saw reported on TV she worried he was involved.  She always had to call to make sure he was OK.  Every time my uncle took his family on vacation in the Smokies, she was convinced the Indians would scalp them.  In her defense, she was born in 1890, but I still don’t think Native Americans were a threat at that time.

I’ve often wondered if her influence is why I married a worrier.  He is a pastor, a strong man of faith, but if he can’t “fix” everything, he starts to worry.  For 23+ years, I have told him that worry is a lack of faith in God.  Worry gives Satan a foothold in our lives, because it shows doubt that God can and will keep His promises.  Worry is a sin.   I have to give him credit, though, after all these years, my husband worries much less.  As a family, we have been in “only God” moments more often than not.  God has never let us down, He has never lied to us, never left us.

Too often, Christians take their needs, problems, concerns to the feet of God, but then pick them back up and play with them like worry beads.   Leave them there!  If you are unable to give complete control to God, to look at Him and not your circumstances, then there is doubt in your faith.  Jesus said faith the size of a mustard seed could move a mountain, so why are there still mountains in our way?  Because we have doubt.  Doubt diminishes our faith.  Step out, trust God, remove worry and doubt, and watch your faith grow.

3 thoughts on “Worry vs. Faith”

What’s Been On My Mind